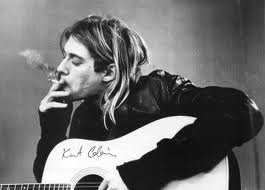 I have been spending time in the Emerald City (aka Seattle) this weekend with a group of fellow music enthusiasts and of course I have been quite inspired. I will be heading over to the Experience Music Project today as part of a music geek sojourn to a place that is seemingly magical and full of wonder for many of us.

With the ubiquity of Nirvana hanging over the cultural landscape of Seattle it was timely this morning to read a post by Alan Cross in which there is some speculation around how Kurt Cobain would have fared if he had began his career in this age of social media and file sharing.

Cross poses a few interesting questions, such as how Kurt Cobain would feel about his music being available for free, or if Nirvana would have even fundamentally existed in the same manner? The later question is intriguing for me in the context of this being a cultural milieu that is arguably more niche oriented and less likely to be populated by cultural products consumed on a mass scale. Nirvana certainly would engender a devout fan base if starting today, though the seismic impact they had on the musical landscape seems less like a possibility in the flooded digital landscape of today's music scene.

It's an intriguing scenario to contemplate and ties in nicely with some conversations I have been having this weekend around how music is not only consumed, but how it is even perceived differently by a younger generation in this age of social media and digital abundance. It seems to be a more disposable entity at this time where the act of fully attending to music (and thus allowing it to have a lasting impact) is diverted by the need to focus on the next buzz worthy song or trending artist of the moment.

In this context Alan Cross speculates around how Kurt's internal struggles would play out; "Kurt was conflicted about fame. He wanted his music to be world famous yet he didn't want many of the trappings, sacrifices or responsibilities that came with it. If he were a young musician active in music today, he might have found himself extremely frustrated at not being able to break through and be heard".

I found myself thinking that perhaps Cobain might have been a different person in this age. Certainly the core of who he was would be similar, though I think it is highly probable that his expectations might have been fundamentally different. Although he would still be motivated to create his music, perhaps there would have been no expectation of making millions, or even sustaining a relatively decent living off of his art.

Would these different expectations have lowered his angst about the potential impact of being famous? In the context of the internet not being a neutral medium (think "the medium is the message") I actually think that not only would his expectations have been altered, but perhaps the fundamental manner in which his brain worked or how he even approached his craft might have been different somehow.

I wonder if his attention have been more diverted in multiple directions, such as the self-marketing and publishing that is required more of musicians starting out today. I also think that somehow this would have altered his approach or motivation around recording his music, and perhaps the feeling of having more direct control would have impacted even the type of music he would make.

Speculating about whether he would still have committed suicide is a more complicated matter, as I don't subscribe to the view that his internal conflicts about fame were the only reason for this.  It is quite possible that his internal struggles and doubts might have surfaced through other avenues, though I do think that being potentially relieved of the worry over "selling out" or being famous might have been somewhat liberating for Cobain as well.

Intriguing things to contemplate (for me at least) and I would love to read other people's thoughts about this. You could certainly play this scenario out with a number of different artists, as the breathtaking speed of social chance around us seems to be conducive to this sort of speculation.
Posted by Westcoast Walker at 10:58 AM

Email ThisBlogThis!Share to TwitterShare to FacebookShare to Pinterest
Labels: The Medium Is The Message

What a fascinating and thought-provoking post! It brings me back (in so many ways) to the conversations and speculations in which we indulged recently in Seattle. The impact that rampant social media has upon the way we consume and produce music, as well as the subtle impact that it may have upon the very core of our personalities, is fascinating to consider, and disturbing.
I need to go think about this...

I hear you Barb - the Cobain article came up around the time we were having those conversations and I thought it would be interesting to contemplate this further.

I honestly believe that this technology has more of an impact on us than we realize, and I do believe that Cobain would be a different person potentially if he was starting out today as a result of this.